A Series of Firsts

A Series of Firsts.

From networks and handsets to apps and operating systems, America’s wireless industry is defined by innovation, ingenuity and enterprise.

America invented the cellphone, the smartphone and the app industry—and today's 4G networks were deployed here first. We lead the world in wireless and that leadership brings significant benefits.

The first smartphone, named the Simon Personal Communicator, was designed by IBM. It could send and receive emails, faxes, and pages.

The first 4G LTE networks were broadly deployed in the U.S.

The first 5G networks were deployed in the U.S.

Americans enjoy the best wireless experience in the world.

High-speed mobile broadband is available to nearly all consumers in the country, and those speeds keep going up. Mobile download speeds have increased 58x over the past decade. Faster speeds mean better connections and more advanced apps.

of American adults own a cellphone

And we’re doing more on those networks. Wireless is increasingly the preferred way to access the internet. In 2020, wireless traffic topped 42 trillion MBs–a 208% increase since 2016.1

Wireless data use will continue to grow. By 2025, people will interact with connected devices every 18 seconds.2 It is indispensable to our everyday lives.

view wireless as a must have in their community – more than good schools at 65%.

would rather give up chocolate than give up their cell phone.

can’t live without their smartphone.

Companies across different industries work together to create the innovative wireless ecosystem.

Wireless providers deliver the signal that keeps you connected to family, friends, entertainment, jobs and a world of experiences and opportunities that make life better. Supporting this are network equipment manufacturers, handset companies, app developers and more. Learn more about how wireless works.

Your wireless device can send video, voice, texts and email over thousands of miles in a fraction of a second. How does that process work?

An impact felt across every state and every sector.

That accounts for 2.6 percent of America’s GDP, making the U.S. wireless industry the 24th largest economy in the world.

The impact is felt broadly across the country. To see the impact on your state, explore our interactive map. 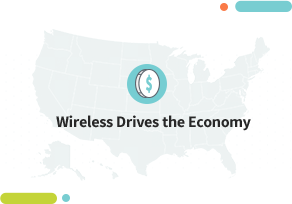 Wireless industry's impact
The wireless industry contributes $475B a year to the U.S. economy and supports 4.7M jobs. It’s impact can be felt across every state.

The wireless industry contributes more to the economy than other major industries like agriculture and publishing.

We Invest in America.

in capital investments since 2016

In addition to capital expenditures, the industry has also spent billions of dollars on spectrum licenses. Since 1993, wireless providers have invested over $200 billion in FCC spectrum auctions to power mobile networks.7

And we’re not stopping here. The industry is investing an estimated $275 billion to roll out next-generation 5G wireless networks, according to Accenture8, creating 4.5 million jobs and $1.5 trillion in economic growth, per Boston Consulting Group.9

Every day, America's wireless companies are doing everything we can to win your business.

We work relentlessly to improve our networks with faster speeds and innovative services such as unlimited data plans. And we spend billions each year to convince people to switch from their current provider or stay with the one they’re already using.

of Americans have 3 or more choices in mobile providers 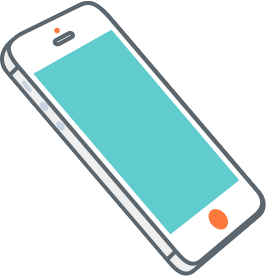 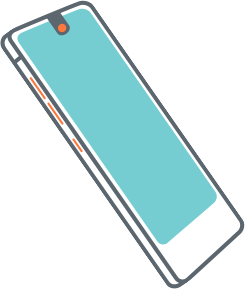 That’s because consumers enjoy a variety of options. Nearly every American can choose between three or more providers and there are nearly 100 mobile providers, resellers, and MVNOs nationwide. Consumers can pick from hundreds of handsets, multiple operating systems, millions of apps and services and nearly 700 different smartphone plans.

All this competition adds up to lower prices and greater value. In fact, wireless prices declined so significantly in 2017 that it drove the average price for core consumer goods down across the economy for the first time since 2010.10

Cost per MB Declined Since 2007

Wireless Price Index declined between 2015 and 2020

For nearly forty years the wireless industry has pushed the boundaries of what’s possible – helping America become the most innovative and advanced country on earth.

In the 1980s, the wireless industry made it possible to make phone calls on the go. In the 1990s, we created text messaging. At the turn of the century, we introduced mobile gaming, as well as streaming audio and video. And with 4G, we've put true mobile broadband in the palm of your hand.

But we aren’t stopping there.

economic benefits from the 5G Economy

jobs created by the 5G Economy

Connecting everyone and everything will unlock innovation across every part of our lives – powering breakthroughs in healthcare, energy and manufacturing.

5G Networks will be:

Discover the next chapter

How the Wireless Industry Powers the U.S. Economy